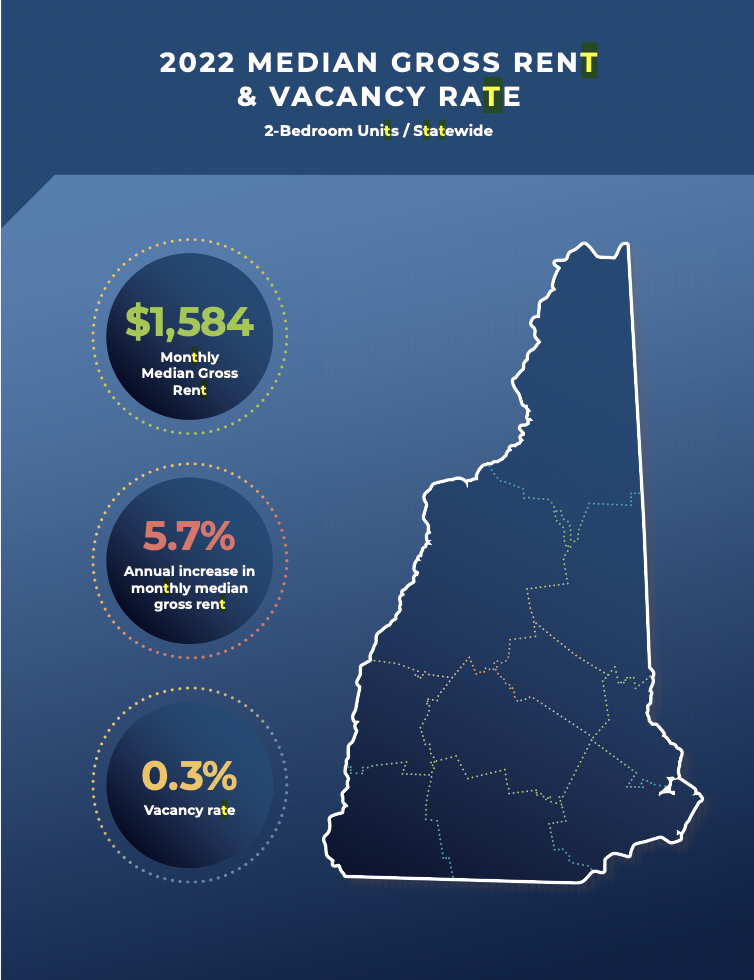 The already strained rental housing market is tightening further as the short supply and high price of homes for sale, together with rising mortgage rates, has frozen renters in place, which in turn has shrunk vacancies and raised rents.

Noting that efforts are underway to overcome the shortfall of at least 20,000 housing units overhanging the market, the 2022 Residential Rental Cost Survey Report prepared by the NH Housing Finance Authority concedes “it will still take years to achieve a balanced market for tenants and landlords.”

Rob Dapice, executive director and CEO of NH Housing, said that “a lot of factors have affected the imbalance between demand and supply in the housing markets.” Increased interest rates, he said, have slowed the pace of home sales, but not as yet brought home prices down significantly. As the prospect of homeownership have diminished, pressure on the rental market have mounted.

“We’ve seen some progress on the production side,” Dapice said, “but the imbalance between demand and supply has not really changed.” Reform of local zoning ordinances and permitting processes, he said, is “very important.”

Dapice said the agency is working with the NH Association of Realtors and Business and Industry Association to encourage cities and towns “to make a difference by seeing there is a problem and wanting to solve it. We have a lot of community outreach work to do,” he said.

Dapice noted that InvestNH, the $100 million housing initiative undertaken by the governor and administered by the Department of Business and Economic Affairs, has allocated $5 million to NH Housing to provide grants to municipalities to refine their land-use regulations to expand opportunities to develop affordable housing.

The report paints a bleak picture of the current rental market.

Since 2017, median rents of two-bedroom units have risen in all 10 counties.

Grafton County, where the growth of Dartmouth-Hitchcock Medical Center has driven demand for housing in the Hanover/Lebanon market, posted the steepest increase, 48 percent, bringing the median rent of two-bedroom units to $1,683. Median rents have risen 34 percent in Hillsborough County, to $1,858, 21 percent in Rockingham County, to $1,708, and 36 percent in Strafford County, to $1,572.

Moreover, nearly half these renter households were paying 30 percent or more of their income in rent.

Meanwhile, the statewide vacancy rate slipped further, from 0.6 percent in 2021 to 0.3 percent in 2022. A vacancy rate of 5 percent signals a balanced rental market while a rate of 3 percent measures the turnover of existing inventory. In Coos and Carroll counties, the vacancy rate for both two-bedroom and all units was above 2 percent, but it was below 1 percent in all of the eight other counties.

These articles are being shared by partners in The Granite State News Collaborative. For more information visit collaborativenh.org.